Top of the world, falling ice and fallen fort. 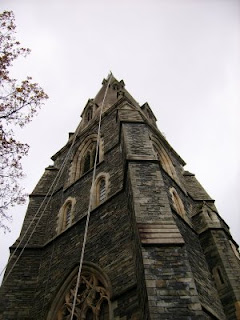 1. I tell Nick that there are two steeplejacks on the church -- but as I don't have my glasses on, he tells me not to be so silly. Later, he puts his glasses on and sees for himself. Much, much later, we visit the church and he chats to them. One steeplejack is feeling very pleased with himself because he's picked the sheltered side of the tower on a day of driving rain and hail. He says that the church will stay up for another 125 years. They are about to set out to the chippie for something hot, but the another shower sends them back to their van. (Picture by Nick).

2. The waiters pause to look out of the window at the sky tipping hail on to the outside tables.

3. We overheard people at dinner talking about a Roman fort. We find it on the map not far from the village and set out to look. Low walls mark the lines of the buildings. Sheep step in the sodden grass where soldiers homesick for other parts of the empire might have walked.
Posted by Clare at 11:38 pm

My name is Clare Law and I'm a mother and a writer and an editor. I kept this daily diary between 2004 and 2014, and I restarted during the 2020 coronavirus pandemic. The practice of noting and describing these three things each day helps me take note of life's many tiny joys.