Sunset, siblings and closing the door.

1.  The alarm goes off telling me that it's time to go and watch Bettany's dance class. I go to close the shutters before I leave and see that a deep red sun is touching the dark horizon.

2. In front of us very small siblings bob along in time to the music.

3. We close the door behind us, and we're home for the evening.

1. The children are very excited to find that two boxes of Christmas presents, and two mysterious advent parcels in biscuity wrapping paper have been delivered overnight.

2. At breakfast, somehow there is rooibos brewing in the pot, rather than tea. It makes an interesting change.

3. Bettany and I sit at the kitchen table with the house calendar and write festive treats and happenings on the tiny cardboard squares that go in our advent calendar house. It feels nice that she values the advent house experience so much that she wants to get involved in it, rather than just letting it happen to her.

Toy panic, tinplate and soon to be.

1. The post has brought a new Fortean Times, which promises lurid tales of panic about satanic toys -- just in time for Christmas shopping.

2. I have a few minutes to wait and I spend it looking at the bright simple graphics on tinplate toys in a shop window.

3. The joyful news that our friends are soon to be grandparents.

Headache, unicorn and in person.

1. I've had the vague, jittery kind of headache all day and don't really want to take anyone out for hot chocolate -- but sit down in the window, a chat and a huge mug of sweet chai sorts me right out.

2. We cross the road then stop and have a good look at the illuminated Christmas unicorn rearing above the tall laurel hedge.

3. I'd heard through the grape vine that she'd had an accident: to see her in person, cheerful and healing.

1. I enact a one-person mutiny at the thought of making pancakes for breakfast -- I've always done it, but today, I just don't want to. Nick asks where the recipe is, and when I come downstairs he is making the batter. Later, we show Bettany how to cook and flip a pancake.

2. I step away from the market stall we are admiring because I'm about to sneeze. I sneeze once, which is a relief, and then I sneeze a lot of times. When I stop, I get a round of applause and some congratulations. Bettany, meanwhile, has sidled away because she doesn't want to be associated with a parent who draws attention to herself.

3. Green and white spring onions dropped into the middle of the soup make it look like human food, rather than bland fuel.

1. This morning has been hard work. It's a relief to slip in between the lines of a structural edit, which is a task where I can let the words be and concentrate on the story.

2. Nick reminds us on this rainy evening to 'Hit the easy button all the way. Get a taxi up there,' he says.

3. '...and then Mummy said it looked delicious and she was starving, and the lady gave us extra.'

1. Homemade blackcurrant jam -- it's a summer afternoon that you can put on a toasted bagel.

2. Nick exclaims rather happily, 'Broad beans are nothing like they used to be.'

3. Granny and Bettany go through the toyshop's Christmas catalogue.

Sunset, siblings and closing the door.

1.  The alarm goes off telling me that it's time to go and watch Bettany's dance class. I go to close the shutters before I leave an...

Get 3BT to your inbox

To receive these posts by email, please use the 3BT Substack. 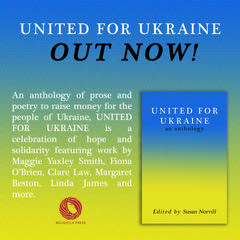 I am so proud to have a piece of work in this anthology, United for Ukraine, the profits of which go to support the people of Ukraine. To buy a copy, visit visit Boudicca Press.