1. Selfless sacrifice. We ran out of bread during the morning lunchmaking session. This wasn't due to bad planning on the cook's part -- it was lovely fresh bread with a crust from the bakers, which means it gets cut very thick. Julie says: 'Wayne giving up his sandwiches to the three of us who had none was a beautiful thing.' and Wayne says: 'Rosey giving me her sandwich was beautiful too.'

2. African jobs. We met a witch doctor selling 'SEX POWDER -- Doctor physician approved' with a metal sign. The sign showed a lady who had been pregnant too long -- the powder had helped her give birth to a big baby wearing trousers and a jumper. Wayne said he would have tried it 'but then I saw the spoon.' We asked how long it would take to work: 'Depends on how good your blood is,' was the mysterious reply. Later we were stopped by the tetse fly man. His job is to make sure vehicles don't bring tetse flies on to his patch. Tetse flies are little buggers -- they steal your blood with a painful sting and they spread sleeping sickness. We learned all about them in Serengeti -- they fly into the back of the truck causing an ecstasy of slapping and jumping and shouting and waving. The tetse fly man was wearing a blue shirt -- blue and dark colours attract tetse flies. First he checked the sun visors in the cab in case Wayne and Anne had any concealed there; then he waved his net around. We invited him into the back, but he wasn't interested. Probably because we weren't swearing and slapping each other with newspapers. (Picture by Rosey Grant) 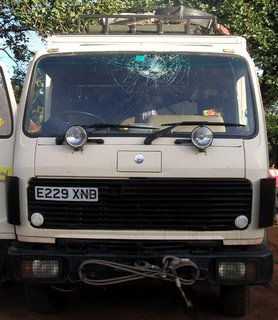 3. Our leader not being beheaded by a snapped tow rope. We were halted by a jack knifed lorry on a narrow mountain road -- with his brakes failing, he had chosen the cliff rather than the drop and had spun right round. He was OK, but an impatient coach had got stuck trying to pass the lorry on the verge. George, our truck, sprung into action. We hooked up the tow rope and piled out to watch Wayne save the day. But the strain was too much -- the cable snapped and flew backwards hitting the windscreen, making a dent the size of your head in the top slightly to the left. Wayne was so surprised he didn't even swear. Anne, who was videoing the whole thing, did it all for him. So Francis and Bob and some others went round and helped dig the coach out and the traffic started moving again. The coach passengers thanked us warmly and we continued on our way. (Picture by Rosey Grant)

Chipata to Ilongwe, Malawi
Posted by Clare at 7:35 am