Boys together, agriculture and baking tray. 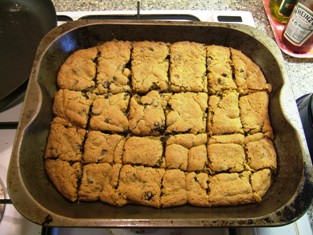 1. At around midnight my brother Robert phones. I can't quite make out what he's saying because he's giggling over drunken boy shouts of 'Rob's gay' and 'We're all in bed together.'

2. Waking up to Farming Today on the radio when it's about free range hens, because they make such comfortable noises.

3. From the contents of Joe in Vegas' exciting parcel of Tollhouse Chocolate Morsels, I made some cookies. The first tray were hideous mutants that had to be eaten immediately... I mean humanely destroyed. But the second tray was golden brown and crisp on top but moist in the middle. I have two left for lunch tomorrow, but the rest walked out of the flat inside people or in parcels for sick grandmothers and deserving neighbours and colleagues. Joe says he normally eats quite a few of the chocolate morsels. I would like to reassure readers that most of the morsels made it into the cookies -- you just can't see it because they sunk to the bottom. Photo by Katie Skinner