1. We had travelled by open boat straight into the driving rain through the trackless wastes of the Okavango Delta. When we reached the pick-up point for Umvuvu, we were cold, wet, worried about our sleeping bags and a bit irritable. But then something made Iris laugh (it’s a sort of a-ha-ha-ha ha-ha-ha), and things seemed a lot less awful.

2. The blissful ablutions at Umvuvu bush camp. They are open air, which prevents bastard mosquitoes concentrating where you are most vulnerable. They are single sex so you don’t have to worry about boys walking in. The walls are bundles of reeds, with straw roofs where needed (i.e. over the loo and where you leave your clothes while showering). The showers are hot -- really hot, not just pretend hot -- and there are towels and soap (towels and soap!). The loo is clean and it flushes at the pull of a handle, so there is no need open the cistern and fish around. It uses a reedbed filtration system, so it’s all environmentally friendly, too. There is no door -- instead you hide behind a spiral of screens, hooking a string across the entrance.

3. ‘Sound of the gas water heater kicking, umph!! Umvuvu campsite godlike showers’ someone has written in my diary. They sign themselves KWW, so I imagine it must be Kevin.

4. The campsite itself is pretty amazing. The owner describes it as his garden. It is a series of clearings joined by mazey paths carved out of the bush on a remote delta island. Walking round and not being able to see over the vegetation made me feel as if I was tiny again. 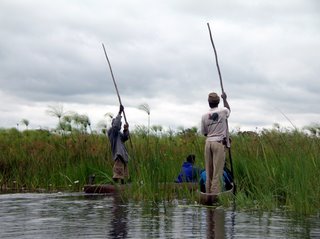 5. Travelling by mekoro. These are dugout canoes -- although they are mostly fibreglass these days. Two of us sat in each one and we were poled through the reeds by a local man. We were only just off the water and the grasses parted before us and closed again behind us. There was so much to see at that height -- tiny frogs in blood red and buff and pearly green, water spiders, gekoes. There were lilies, too, in blue and pink and yellow. The scent is very light and sweet, and you can only really detect it if you pick the flower and stick your nose right in. Our poler told us all about everything we saw, and gave us things to eat -- I liked the soft papyrus pith best. (Picture by Rosey Grant)

6. We heard hippos -- huh huh huh; then we saw a hippo. Very quietly and carefully -- because a stroppy hippo would probably eat a mekoro without realising -- we stood up for a better look at the curve of its back. No movement. There was some debate in Setswana. Joseph, who was in charge, clattered a stick on his pole -- hippos hate sticks, well-known fact. No movement. ‘I think it’s dead.’ But just to make sure he threw the stick. It bounced off. Definitely dead. We poled over and had a good look from all angles, including -- dear god the smell -- downwind. Joseph stepped out of the mekoro and posed on its flank. It floated on its side, eyes and ears eaten away. It had several huge gashes on its side and head. ‘It’s been fighting with another male.’ They have huge teeth -- the size of your forearm -- and have been known to bite people in half. I know a tonne of rotting hippo is not in any traditional sense beautiful, but I had been secretly yearning to see a dead hippo. See a sensible person would not go within 100m of a live hippo, so a dead hippo is the only safe way to get a good close look at what the skin is like (thick, rough and greyish brown) and what the size is (Volkswagen Golf).

Also, the other beautiful thing about this story is that we got back to Anne in dribs and drabs, so she heard all about it eleven times. She seemed surprised that we thought it was the highlight of our day.