1. Climbing up Dune 45 to see the sun rise. We tramped up the spine of the dune, following the trail of footprints, and then ran all the way down the flank to breakfast.

2. Walking with Boesman. He is an expert on the San people and he shows walkers the wonders of Sossusvlei. He can find a lizard that has buried itself in the sand, and open up a trapdoor spider nest. He can show you that the black sand sticks to a magnet, and tell you why it doesn’t get all mixed in with the red sand; and explain how vleis form. He tells San stories; and explains why the things that the San do that make them appear savages are actually very sensible: they eat 10kg of meat at a sitting because if you’ve eaten the meat, no-one can take it from you; it doesn’t go off; and it’s easier to carry. He told us that the first thing a San child learns is its mother’s footprint: ‘See my footprint, see my face.’ They could tell if a footprint was made by a sick man or a healthy man; and it was said that one day a young man might see footprints that set his heart on fire, and he would follow them and find himself a wife. 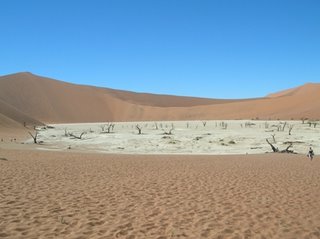 3. Dead Vlei. It looks as if someone pointed a finger and killed a forest. Dead trees have been stuck in the white mud for about 400 years now. The desert is too dry for them to rot, so here they stay.