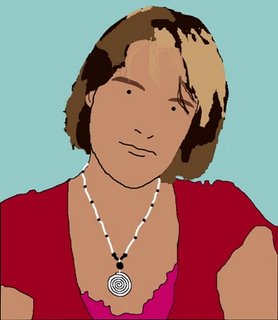 1. Ever since I saw a tutorial for Julian Opie-style pictures on Family Portrait Artists I have wanted to make one. And now I have, and I like it. I used a picture that PaulV took as the basis and played with Photoshop until I got it right.

2. A distracted mother unloading a carful of children while trying to put her daughter's school straw hat on her son's head.

3. I was very apprehensive about joining a new yoga class -- it's hard to twist yourself into odd positions in front of a crowd of strangers, and I really wanted to like this class because it's nearby and at a time I can manage. The group was so smiley and the teacher was so friendly that I felt at home.

4. I get an extra beautiful thing today because it's the second anniversary of this blog. I'm glad I've kept it going -- I know I'm happier for working on it, and I hope you are all happier for reading it. The extra bonus beautiful thing (and this is going to sound really sucky) is my readers. Thanks specially to those of you who join in. I love your comments and your beautiful things. And thanks also to those who keep quiet -- don't think I know you're there! That's what hit counters and stats are for.
Posted by Clare at 10:31 pm